In the latest dictionary series - DICT RM, I copy the content of the first Chinese-English dictionary - A Dictionary of the Chinese Language, compiled by the Anglo-Scottish missionary Robert Morrison from 1815 to 1823. Through copying the first Chinese-English dictionary, I revisit the perception of Chineseness in the early 19th century. The perception will then be transformed into a nonvolatile-residue-graphic on a new page. 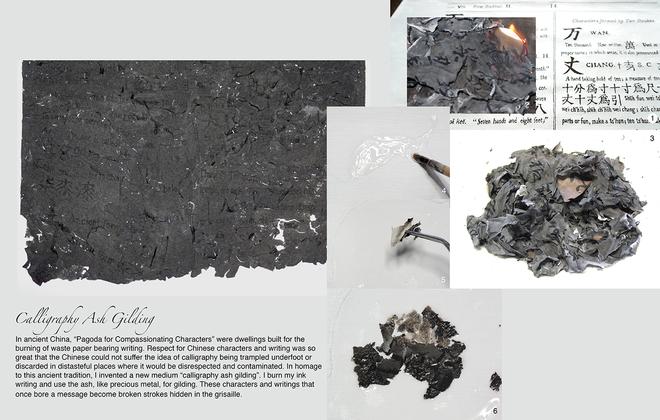 ​​In ancient China, “Pagoda for Compassionating Characters” were dwellings built for the burning of waste paper bearing writing. Respect for Chinese characters and writing was so great that the Chinese could not suffer the idea of calligraphy being trampled underfoot or discarded in distasteful places where it would be disrespected and contaminated. In homage to this ancient tradition,

I invented a new medium “Calligraphy Ash Gilding”. I burn my ink writing and use the ash, like precious metal, for gilding. These characters and writings that once bore a message become broken strokes hidden in the grisaille.